On October 12, the DRDO’s (Defence Research and Development Organisation’s) indigenously designed and developed 1,000-kilometre cruise missile, Nirbhay, was test-fired from the integrated test range on A.P.J. Abdul Kalam island off the coast of Odisha.

It was the seventh test of the land-attack missile, and the first test using an indigenously built turbo-engine. The test was unfortunately a failure—the missile developed a snag and the test had to be aborted eight minutes after launch. But it was just one disappointment in a series of successful missiles tests over the past month.

Since September 7, the DRDO has carried out ten test firings of a wide array of missiles—roughly one every three days. These missiles range from the nuclear-capable Shaurya—a ground-launched variant of the submarine-launched B-05 ballistic missile—the air-launched Anti Radiation Missile ‘Rudram’ and tactical missiles like the yet to be named laser-guided Anti Tank Guided Missile.

On September 7, the DRDO successfully tested the Hypersonic Technology Demonstration Vehicle—a scramjet-powered cruise vehicle which achieved a velocity of nearly 2 kilometers per second and which will serve as the test platform for a future range of hypersonic cruise missiles.

Similarly, on October 5, the Supersonic Missile Assisted Release of Torpedo (SMART) was test-fired—a high-speed missile which delivers a lightweight torpedo to attack enemy submarines over 600 km away. 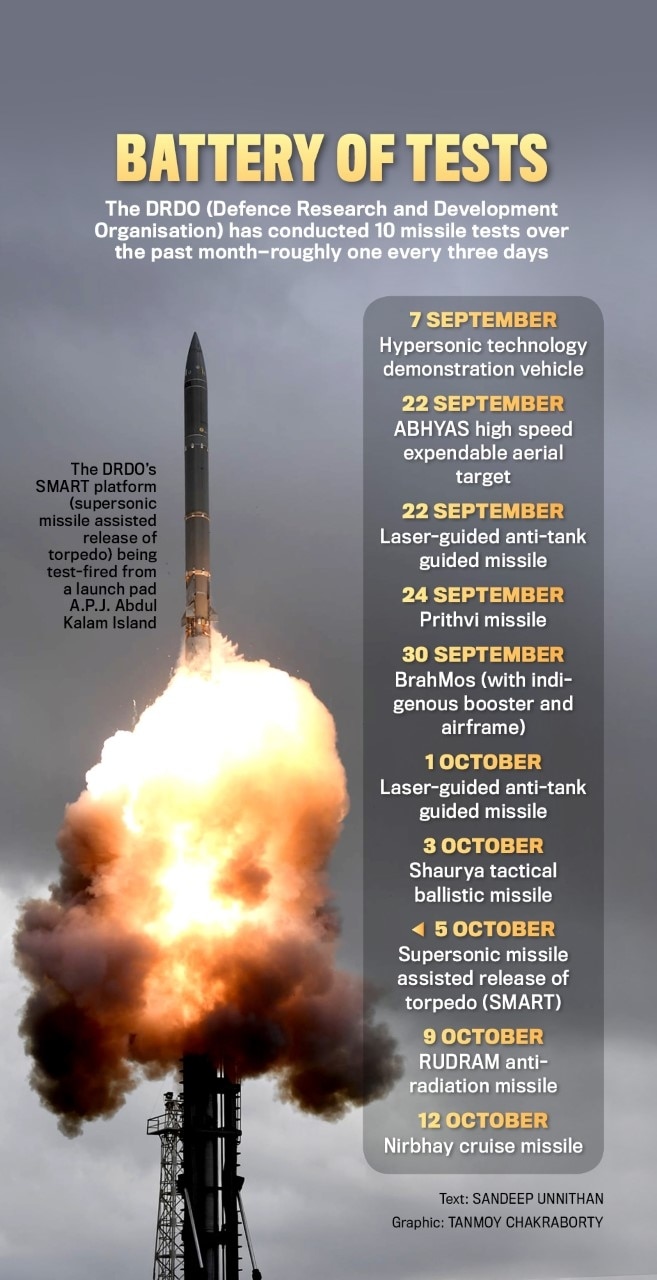 Top DRDO officials said the wide range of tests were a validation of the organisation achieving self-sufficiency in missile technology. “We have an array of boosters, warheads and seekers—you give us the mission, we will give you the missile,” says a senior official.

India must start playing a bigger role on the world stage

Ladakh standoff: ‘No meaningful progress’ over troop disengagement between India and China

India must start playing a bigger role on the world stage

Ladakh standoff: ‘No meaningful progress’ over troop disengagement between India and China

Aiming for the top

Explained: BrahMos missile and significance of ongoing series of tests by Armed forces